Today is the second in a 7-part summer sermon series called “Going Deeper.” This series is intended to inspire worshippers to proactively go one step deeper in their walk with Jesus Christ. Today’s message focuses on the fact that going spiritually deeper begins with being aware of and committing oneself to living a “Christian ethic.”

Yes or no: should the existence of Christianity have any impact on our world? If yes, should it be a positive or negative impact?

I’m sure every Christian would say we’re supposed to impact our world, and it’s supposed to be in a positive way.  And without a doubt, more good than we’ll ever be able to measure has been done in the name of Jesus.  Unfortunately, the same can be said in regard to a negative impact. Since the birth of our faith, lot of bad has been in the name of Jesus, and this is a black eye we still have to this day. There are people here in our own community who would say that the biggest difference between them and most Christians is that most Christians know and believe they’re supposed to live by a higher standard, but they knowingly don’t. They would say that most of us present ourselves in a certain light when our actions and words would say otherwise. And that’s why many outside the church call us hypocrites.

20 years ago the Barna Research Group undertook a big study to compare what we might term “ethical behaviors” between professed Christians and those who aren’t. The behaviors included (but weren’t limited to):

The results showed that statistically speaking, there is no difference in behaviors between Christians and non-Christians when it comes to these “ethical behaviors.”

So, this begs the question: should be distinguishable marks of being a Christian? Afterall, the Bible does say that God has “set apart” his people from everyone else. Why? For the purpose of reflecting his glory and love so that others might see him and be drawn to him. This was Jesus’ point when he said: “Let your light shine before people, so they can see the good things you do and praise your Father who is in heaven” (Mt 5:16).

So based on what Jesus says, I would contend that there should be something distinguishable about those who follow Jesus Christ. And it really can’t be external accouterments, like jewelry or clothing. Here’s a good one – a t-shirt that reads, “They will know we are Christians by our T-Shirts.” And while there’s nothing wrong with wearing a t-shirt that clearly conveys a Christian message (which could be seen as a type of personal witness to one’s Christian faith) I think the marks God’s looking for go deeper than a cotton t-shirt.

The reason I bring this up is because we’ve just begun a series about the importance of going deeper in our faith. One of the questions I raised last week was What does it look like to go deeper? Hopefully you can see a correlation between the question “What does it look like?” and the notion that there should be some distinguishable marks of being a follower of Christ. Personally, I do think there’s a “look,” but again it’s not an external look. It’s not about our clothing or our hairstyle. It’s something else, something deeper and more significant. And the more you and I can grow in this aspect of our life of faith, the distinguishable we become. And in turn, the more God’s able to use us to accomplish his purposes.

If I were to do a quick survey of everyone here, I’d probably discover that there are different ideas about what it means to go spiritually deeper. For some of us, it means deep knowledge of the Bible, where you’re looking for meaty Bible studies that get into the meaning of Greek and Hebrew words and you’re reading what some of the Bible commentaries say. For others of us, it means deeper experiences with Christ, where you’re looking for greater intimacy with God and fullness of the Holy Spirit, and hoping for chills to run up and down your spine during worship; you’re looking for a very tangible experience of worship. And for yet others, it means going deeper in our spiritual practices and disciplines; for you, it comes through more prayer, more reflection, more fasting, etc. So we have these three ways of going deeper: deeper knowledge, deeper intimacy, deeper practice.

But here’s the thing: John (the author of the letter of 1 John) doesn’t begin with any of these. The first thing John says is, “You want to go deeper? Then stop sinning!” That’s his starting point for going deeper. By John’s way of thinking, if you call yourself a Christian, then you have to live like one! For John, the first mark of a Christian is living a certain way; it’s an ethical issue.

In 1:5 he uses “light” as a metaphor for God: God is light he says; and there’s not a smidgen of darkness in him. The Christ-follower walks in the God-light. Then he gives us a ‘test’ of sorts. In essence he says, If a person claims to be a Christian, saying they have a personal relationship with God, but their outward actions and behaviors are antithetical to the ways of Jesus Christ, then despite what they say about themselves, they’re not actually living in the light of God. Instead, they’re in the darkness – apart from God’s light.

It’s important to note that living in the light isn’t about knowledge. Having more knowledge about the Bible, and even about Jesus Christ does not automatically translate into a life that reflects God’s love and grace. I can know everything there is to know about horses, and about racing horses, and about what makes a winning race horse, but just knowing all that doesn’t make me a horse jockey! As John presents it, living in the light is about outward conduct.

In chapter 2 John continues this line of thought:

This is how we know that we know him: if we keep his commandments. The one who claims, “I know him,” while not keeping his commandments, is a liar, and the truth is not in this person. But the love of God is truly perfected in whoever keeps his word. This is how we know we are in him. The one who claims to remain in him ought to live in the same way as he [Jesus] lived  (1 John 2:3-6).

In this passage John uses two words that are usually associated with the activities of the brain. Those words are “know” and “truth.” To know something, and to know the truth, is generally thought to be a mental pursuit. But John turns our usual understanding of these words on their heads so that they reflect behaviors instead of thoughts. What the indicator that we truly know God? (v. 3) If we keep his commandments.

The truth is, keeping all of God commandments is a daunting task, if not outright impossible. Even the Top 10 – the Ten Commandments – we break on a regular basis. That’s why Jesus pares it all down to love. He says that the essence of the entire Law of Moses, and I think we also include the “rules” found in the New Testament, comes down to loving God with everything we have, and loving other people to the same degree. And to love in this regard is an action; it’s a verb.  It’s what we DO.

Here’s John point: anyone who claims to know God while not acting in love towards all people is a liar! And that’s because the distinguishing mark of a Christian is not what we believe or say, but how we live. Specifically, living in love.

In chapter 3 John drives this same point home with even greater intensity. From his perspective, there’s no gray area; there’s no fence-sitting.

You’re either in the light, or you’re in the dark.

You’re either living the truth or living a lie.

In v. 10 he says, “This is how God’s children and the devil’s children are apparent: everyone who doesn’t practice righteousness is not from God, including the person who doesn’t love a brother or sister.” Contrast this with v. 7 where he says, “The person who practices righteousness is righteous, in the same way that Jesus is righteous.” It seems to come down to these two words: Practicing righteousness. Put another way, with the help of the Holy Spirit doing your very best to live a life of active love towards all people.

Do we sin? Sure we do. But according to John, the mark of a follower of Jesus is not that we never sin; rather, it’s that we continually ask God for help to not let it become a habitual sin. Having said that, please, please, please remember this: no matter the sin, God’s grace is always greater. The point is this: practicing  righteousness – or, living a life of love towards all people – doesn’t make one a Christian, but it is a distinguishable mark of being one. 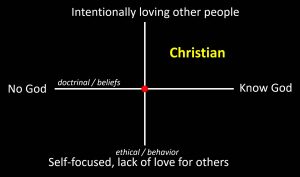 So, for the purposes of thinking about going one step deeper in your own walk of faith, it’s important to keep in mind that what we believe and how we conduct ourselves both matter. For those of you who are visual learners, I’ve got a simple graph to show what I’m trying to say. This horizontal line represents a one’s spiritual journey. Everyone starts out on the left side where it says “no God,” and that’s because none of us come into this world knowing God. But hopefully over time a person moves towards the right side where it says, “Know God.” On this end a person has a fully formed faith and is in fellowship with God; they’re walking in his light. This horizontal line represents what we believe; we either don’t believe in and know God, or we do believe in and know God.

Now, we can imagine a person—maybe ourselves—making progress along this horizontal line.  At a certain point they come to believe in God, but they’re still not sure about Jesus. This is normal. Eventually, though, they come to a decision point where they accept Christ as Savior and Lord (indicated by the red dot in the middle of the line). At this point we would generally say someone’s a Christian, even though there’s still a lot of growing to do.

Now look at perpendicular line. It represents one’s outward conduct; it represents the manner in which they live a life of love towards all others. On one extreme is a life that’s focused on self and a general lack towards others (again, where we all start), and the other is a life of obedience and holy living (with the help of the Holy Spirit).

We now have four quadrants:

Of these four quadrants, it’s clear that upper right one reflects John’s idea about what a Christian “looks like.” It represents the persons who is in relationship with God and is living a life of outward love. They resemble Jesus Christ in character and conduct.

I think John would say that a growing Christian is one who is consciously and intentionally moving in the direction of quadrant four. So when we talk about “going deeper,” we’re talking about growing closer to God AND living a life that increasingly reflects God’s love for all people. For John, the commitment to living a life of love is just as important as knowing him. And, in fact, living a life of towards others is absolutely necessary if we want to call ourselves Christians. John Wesley put it this way: we can’t be saved by doing good works, but neither can we be saved without them.