Do you all know who J.K. Rowling is? If you don’t, she’s the author of the Harry Potter series. I’m told that at one point she was wealthier than the Queen of England. But her journey to that point is chock full of failures. Her first marriage failed. After her divorce, she was unemployed and homeless. She fell into serious depression and seriously contemplated suicide. She lived on Great Britain’s version of welfare as a single parent. Her manuscript for the first Harry Potter book was turned down by twelve publishers. Twelve rejections. Twelve failed attempts to get her book published. In one sense, she probably felt like a nobody who had an idea that nobody else wanted to hear. At that time in her life, she failed so many times she didn’t know if or when she’d ever succeed.

But there was something that kept her going. At some point along the early part of her journey she came to the conclusion that “it’s impossible to live without failing at something,” and then stepped out and risked failure in order to achieve her goals.

Most if not all of you have heard the statistic about Thomas Edison’s failures. Early in life, one of his school teachers said that he was “too stupid to learn anything.” He was fired from his first two jobs for being non-productive. And later on as an inventor, it’s said that that he made 1,000 unsuccessful attempts at inventing the light bulb.

Babe Ruth is famous for his long homerun record. But did you know that for some time he also held the record for strikeouts?

Albert Einstein, who experienced his own share of failures, is quoted as saying, “Anyone who has never made a mistake has never tried anything new.” Anyone who’s been successful in some business venture will tell you how true that is.

My guess is that we’d agree with that sentiment, at least in principle. But when it comes right down to it, most of us un unwilling to risk failure, because we see it as a bad thing, something to be avoided at all costs.


Not wanting to disappoint others just may be the root of our fear of failure.

The fact is, we fear failure. And because of this, it’s easy to get into the habit of not taking any risks, and not doing anything new. Because it’s been our experience that if we do take a risk and try something new, and it doesn’t pan out well, then someone’s bound to say, “I knew we shouldn’t have done that!” And so we don’t step out and try something new. Why? Because 1) we don’t want to fail, and 2) we don’t want others to see us as a failure. In other words, we don’t want to be a disappointment.

And you know what? Not wanting to disappoint others just may be the root of our fear of failure.

Who here wants to be a disappointment to someone else?

I’m not sure there’s another word comes with the level of shame as the word “disappointment.” Picture a parent talking to their son who struck out every time at-bat. “I’m so disappointed in you.” Or the musician who messed up really badly during a performance in front a crowd of people reading in the paper the next day, “That concert was a great disappointment to anyone who attended.” How many parents and teachers and bosses have turned that word into a kind of threat? “Whatever you do, don’t disappoint me!” The idea of disappointing someone, especially someone whose opinion or judgment or viewpoint you highly value, can be a huge burden to carry around. Someone like a parent, a coach, a teacher, a boss, a friend…and yes, even God The constant fear of disappointing someone important to you is truly burdensome. And, shame is its byproduct.

Adam Hamilton points out that some of our unhealthy patterns of trying to please others – to gain their approval – result from our own need for acceptance, including acceptance from God. Yes, it’s true that everyone needs to feel accepted; we’re wired to need to belong and be loved. But if we’re not careful, that need to be accepted can get out of balance. If we’re not consciously aware of what’s going on in our hearts and minds, it can get to the place where own sense of self-worth is dependent upon gaining the approval of others. I’m only happy with me when you’re happy with me. That’s not a healthy or holy place to be.

The key to a healthier relationship with God and others is having and living out of a proper understanding of God’s grace. Because – and I really do think this – many Christians: 1) are not equipped with an accurate understanding of God’s grace; and more significantly, 2) often fail to apply the truth of God’s grace to our lives. Because when we DO fully live in the truth of God amazing grace, shame falls away. And that’s because the grace of God has the power to eliminate the need to win another’s approval – Including God’s!

For the sake of discussion, let’s define grace as unmerited love and acceptance — love and acceptance which we don’t earn by doing what is right, or pleasing, or desired, or appropriate, or moral; or by being fair, or correct, or just, or holy, or honorable, or self-giving. It’s God’s love and acceptance which we don’t deserve for the fact that we can point to times when we do that which is wrong, displeasing, undesirable, inappropriate, amoral, unfair, incorrect, unjust, unholy, dishonorable, and self-focused. Grace is God choosing to love you and me in spite of our sins and failures, and without the slightest regard to our self-righteousness. Grace is God accepting us just as we are. Period.

What does all of this mean? It means that there’s nothing you can do that will cause God’s love for you to increase. What if from this day forward you did all the things which we know please God, and if you never again did a single thing which we know displease God? Might that result in God loving and accepting you just a little bit more? The answer is no.

If this is true, then the opposite has to be true as well. If we can’t attain God’s love and approval, then neither can we forfeit God’s love and acceptance through a unholy living and doing that which displeases God. (The one exception to this is blasphemy of the Holy Spirit, which Scripture says is the one and only unforgivable sin. And if have even the tiniest concern or question about whether or not you’re guilty of that, then be rest assured that you’re not. If you were guilty of it, you wouldn’t be the slightest worried about it all.) We can’t earn God’s love and acceptance, and we can’t lose it. God love and accepts us because he declares that he does. That’s grace.

In our reading from Ephesians, the Apostle Paul reminds us that God “brought us to life with Christ while we were dead” because of our sins (Eph. 2:4). While humanity was still in full rebellion against him, he gave us Jesus and through him reconciled us back to him. Please don’t miss the significance of this. While we were still rebelling against God he reconciled us to him and made us right in his eyes. Did he do this because we were showing signs that we were moving in the right direction? 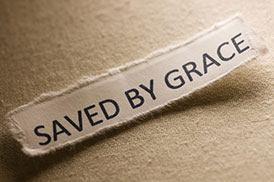 No. Was it because enough people finally got it right, so that he just included everyone else? No. Was it because we pinky-promised that we’d stop rebelling? No. It was “because of the great love that he has for us” (v. 5). We are saved by God’s grace (v. 5).

Think about it in this way: while we were unlovable, God loved us anyway; and while we were truly unacceptable by God’s standards of holiness, he accepted us and called us righteous anyway. That’s grace.

The key to living a life of not fear that you’re disappointing God is to 1) understand the truth of the depth of God’s love for you, and 2) live into that amazing love of God’s.

Fortunately, Scripture has given us a tool to be able to do this. There’s a verse which, if you repeat it to yourself enough, and at those moments when you’re starting to berate yourself for disappointing God, it’ll change your heart, and I believe it could change your life. When Jesus was baptized the Holy Spirit came upon him, and those witnesses to his baptism heard a voice come from the heavens speak directly to Jesus, “You are my Son, whom I dearly love; in you I find happiness” (Mark 1.11).

Again, don’t miss the significance of this. God the Father was speaking a word of truth, a word of encouragement, and a word of affirmation into the heart and mind of his Son, Jesus. You are my son. I love you dearly. And I’m happy with you. I’m sure there were lots of times throughout his ministry that he relived that moment and repeated those words. I am your Son. You love me dearly. And you’re happy with me; you smile upon me.

It is not a twist of Scripture to say that not only were these words spoken to Jesus, but they’re spoken to you and me as well. God wasn’t speaking only to Jesus; he’s speak to us, too. He speaks to me: Drew, you are my son. I love you dearly. And I’m happy with you.

Fill in your name, because that’s who the Father is talking to. He’s talking to you, and he’s talking about you. You are God’s beloved daughter or son. He loves and accepts you dearly. And guess what? He’s happy with you. Right now he’s smiling down on you. Not because you’ve done what’s pleasing to him, but simply because you’re his masterpiece.

This is what I meant earlier when I said that the grace of God has the power to eliminate the need to win God’s approval. We don’t have to win it because 1) it’s impossible to win it, and 2) he already accepts you. Constantly worrying about whether or not you’re disappointing God is a no-win situation. You’re beating yourself up when God’s not. It could even be said that when you do that, you’re holding yourself to a higher standard than God’s.

Now, before I draw this to a close, let me make this one point. While God loves and accepts each of us the way we are, he has no intention of just leaving us this way. He still wants each of us to grow and grow and become more and more like Jesus. But he love and accepts us just the same. That is the truth. That’s the truth of God’s grace I want you to leave here knowing. And to leave here with a greater commitment to living into by reminding yourself that:

Office Hours: During this time of transition, the church office should be open mornings, Monday through Thursday. Please call first if you want to make sure.