This is the first in a 5-part sermon series entitled, “Who I Am In Christ.” Rather than believing the lies often sold to us (‘I am a sinner because I sometimes sin,’ ‘I get my identity from what I have done,’ etc.), this series is intended to help us be very clear about our true identities (‘I am a saint who sometimes sins,’ ‘I get my identity from what God has done for me,’ etc.). Today’s message will focus on the fact that in Christ you are God’s beloved child and Christ’s friend.

I’ll never forget hearing my friend Andy scream that at his parents. It would probably be an understatement to say that he was unhappy with them about something, but clearly he was in a place where the only emotion he was present to was intense anger. Now, you tell me, do you think Andy truly hated his mom and dad?  No, of course he didn’t. Yes, I imagine it hurts his parents to hear him say that, but he didn’t hat them. However, what if they believed it, and responded to their son as if it were true?  What if they emotionally pulled away from him at that point, as a way of safe-guarding their own feelings? That would have devastating effects on their relationships.

Since the 2016 presidential election, we’ve added two expressions to our national lexicon: ‘alternative facts’ and ‘fake news.’ Both of these phrases speak to issue of speaking an untruth. A falsehood. A lie.

Would you agree with me that, generally speaking, lies are bad? They have a tendency to hurt. Lies break down trust, creation confusion, and can destroy relationships.

When it comes to our everyday lives, there are two problems we face in regard to lies. First, as destructive as they are, it’s easy to believe them without question, especially if they align with our own personal experience, or our perspective, or even what we want to be true. In our human brokenness, it’s easy to buy into the lie without question.

I’ll give you an  example from my own life.  For the first quarter century of my life, I truly believed that I could not achieve academic excellence. Academically, I always saw myself as average at best. And for the most part, my grades reflected that perspective.

It wouldn’t be until I was 26 years old that I realized that what I’d believed about myself wasn’t true. It was the final term of my final year of seminary that something happened which made me see myself in a different light. That semester I had four classes, all of which required extensive reading and writing. And for the first time in my life, I started getting all A’s on my school work. The professors liked what I wrote. It was an utterly new experience for me And it slowly began to dawn on me that I might actually be smart! The lie I’d bought into years earlier was that I was incapable of achieving academic excellence.

The second problem is that believing the lie almost always comes with consequences, often bad consequences. Many years ago in one of the churches I served, the man who ran the soundboard somehow came to the wrong conclusion that I’d gone in and messed up all the settings on the soundboard. Regardless of what I said otherwise, he believed I was the guilty party. And that effected our relationship. It started out good, but after he gave life to the lie he believed about me, he grew to mistrust me in everything. And because he was a life-long pillar of that congregation, people listened to him.  I noticed that a few of the other people in the congregation with whom I had good relationships, who were also friends of this man, began to relate to me in a much cooler way. I don’t have evidence to back it up, but think he probably shared his thoughts about me, and they believed him—without ever questioning it or asking me.

That’s our human condition. We easily believe the lie, and believing it can often have undesired consequences.

Let me begin this series by lifting up four common spiritual lies and their corresponding truths. You may be struck by the fact that what I’m calling lies some of you may have often believed to be the truth.

Looking at that first one – I am a sinner because I sin – is probably the biggest lie we tell all the time. Even I’ve spent my whole life saying “I’m a sinner,” “we’re sinners,” as though that’s WHO WE ARE. But the truth is, anyone in whom Jesus Christ lives can no longer self-identify as “sinner” because that’s not who we are in Christ. Certainly, we sin. There’s no denying that fact. We do things we shouldn’t; we choose self over others; etc. But that doesn’t erase the fact that in God’s eyes, we are saints. Saints who happen to sin. Oh, the difference it would make in our experience of life if we stopped speaking this lie into constant existence, and instead spoke the truth. In Christ I am a saint who sins.

I am God’s child and Jesus’ friend!

With that basic understanding of how we’ll be looking at who we are in Christ, I’d like to begin this sermon series with what I think is a foundational truth about who we are in Christ. I am God’s child and Jesus’ friend. In Christ, YOU are a child of God the Father, and a friend of Jesus Christ, the Son. The way I see it, this is a key truth to living a life of victory. And not believing this to be the truth will put you in a terrible place spiritually. Seeing yourself as someone who God’s out to get, someone who’s constantly making God angry, is ultimately going to wear you down.

John (the author of the Gospel of John, who was one of the Twelve Disciples), recorded a very important statement made by Jesus. During the last Supper Jesus told the Disciples that they’d reached the point in their relationship with him where he now considered them primarily his friends rather than his students. Here’s how he put it: “You are my friends if you do what I command you. I don’t call you servants any longer, because servants don’t know what their master is doing” (John 15:14-15).

That’s significant. Friends share secrets. Friends allow themselves to be vulnerable with each other. Friends tell the truth, even when it’s painful. Friends don’t hold back with each other. And Jesus made it clear to them that he now looked upon them as his friends.

Here is the truth: if Christ lives in you, you are his friend! He not only loves you, but he likes you. There were times growing up when my mother would get upset with me (and rightly so), and tell me, “Drew, I love you dearly, but right now I don’t like you at all!” Well, the fact is that Jesus likes you, and he enjoys spending time with you. He wants to be with you. As your friend, he’ll tell you the truth, even if it’s hard to hear. And he certainly made himself vulnerable for you when he stood in your place on the cross.

Here’s the lie we often believe, the lie we have to work to reject: Jesus is ashamed of me. When we look at the things we do and say which we’re ashamed of, it’s easy to conclude that Jesus must be sick and tired of me, and would rather not be with me. He’d rather be with those who do the right thing. We may even come to the conclusion that God couldn’t possibly love me. Those are lies. They’re lies Satan loves to whisper into our ears. But the truth is, Jesus looks upon you and me as his friends.

The other part of this truth is that in Christ you are a child of God. John opens his Gospel by telling us that God the Creator descended into our created world and took on flesh. God took on flesh and became human—Jesus Christ. John 1:11 says that he came into the very world he himself created, to be with the very people he created, but most of them rejected him. “But to those who did welcome him, those who believed in his name, he authorized to become God’s children, born not from blood, not from human desire or passion, but born from God” (vv. 12-13). Meaning, those who say yes to Jesus experience a ‘second’ birth (commonly referred to as being “born again”). 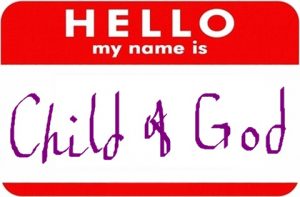 Our first birth is our physical birth which, for most of us, took place in a hospital. The second and more important one is a spiritual birth. The biblical witness is that we come into this world separated from God. So when we say yes to Jesus, we’re born anew, and given life. It’s a spiritual birth.

When this happens, John tells us that we gain a new identity: child of God. To be a child of God means that you’re no longer at odds with him. It means that despite the things you do or say, he still smiles upon you, and seeks to bless you. Certainly, God frowns upon the sinful things you and I do, but that doesn’t translate into God frowning upon us as persons.

Here’s the lie we easily believe: we displease God, and that he’s out to punish us; that he’s just waiting for us to mess up so that he can say, “I caught you!” I’d be a rich man if I had a dime every time I heard someone make a comment to that effect.

Yes, It may be that for some of us, our earthly parents were less than loving or helpful or supportive. Maybe our home lives were dysfunctional, where we were constantly under surveillance. Maybe you could never quite please your mom or dad, or win their approval. That’s an unfortunate reality for many people.

But being a child of God is a good thing. A safe thing. A loving thing. To be a child of God is to be loved, wanted, and cared for. To be a friend of Jesus is to have someone you can turn to in a time of need who will listen and love you no matter what, who will never walk away from you.

To a certain degree, I’ve only touched on the significance of this truth, that in Christ you’re God’s child and Jesus’ friend. Even so, I implore you to believe it to be the truth. And if you find it difficult to believe that—if you tend to believe the opposite, that God can’t love you, or that you feel like he’s just waiting for you to trip up—then I would love to sit and hear your story, and talk with you more about what’s really true. Drop me an email, and let’s set up a time to sit down and talk over a cup of coffee.

Here’s the truth about who you are in Christ: you are God’s beloved child, and Jesus’ best friend.

Previous
The Promise Still Stands
Next
I Am Not Condemned!