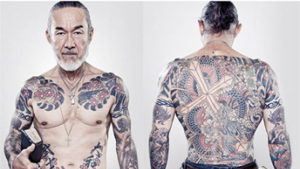 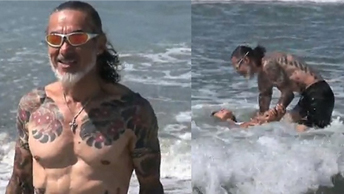 Look at this guy on the left. His name is Arthur Hollands. He looks like someone you’d definitely not want to meet in a dark alley at night. But the picture of him on the right may change your tune about him. What’s he doing? He’s baptizing someone. Contrary to how it may look on the outside (according to many of our pre-conceived notions), Arthur Hollands is a Christian evangelist.

A fair number of you are, or were, school teachers. Having grown up in a teacher’s home, I know that it’s not uncommon for teachers to come to conclusions about the future well-being of certain students – whether negative or positive – based on their behavior, attitude, and performance. While they’re probably correct much of the time, there are always exceptions. In fact, it always makes me smile whenever I hear about a former student was pain-in-the-neck during high school who eventually becomes….a school teacher! We look at them and exclaim, “I never would have guessed!”

So, whether it’s based on someone’s life choices, behaviors, or even their looks, it’s easy for us to come to certain conclusions about people. And we’re surprised when it turns out they don’t fulfill our preconceived notions. I never would’ve guessed!

There’s a man in the Bible who fits into this category better than anyone we’ve personally known. I’m talking about the greatest saint of the church, the Apostle Paul. Paul was responsible for the initial expansion of the first century church. It was he who penned most of the letters which comprise much of the New Testament. And a significant portion of Christian theology is based on Paul’s writings.

For example, the very heart of Christian theology about salvation is the belief that we are saved by God’s grace through faith. This theological idea is based on a statement he made in his letter to the church in Ephesus. He wrote, “You are saved by God’s grace because of your faith. This salvation is God’s gift. It’s not something you possessed” (Eph. 2.8). This is the belief that a person can only be made right in God’s eyes (what we call ‘being righteous’) through their faith in Jesus Christ and their reliance on God’s grace, not through good deeds. This theological stance is so foundational that it’s pretty much the verse upon which was built the Protestant wing of the Christian church. And it comes from Paul.

Not only was Paul responsible for providing us with the basis for much of our core Christian beliefs, but for the most part, he was the one who first opened up the church to non-Jews. He’d travel from town to town, visiting the local synagogues and tell his fellow Jews about Jesus. Many of them became believers, forming the core of those first Christian congregations. Early on, this movement was known as the Way, and its first adherents were the people of the Way. Later on, though, he felt called to tell the Gentile community about Jesus. Those Gentiles who heard and believed joined up with the house-churches already going in various towns. Over time, these congregations grew as more and more of them told others about Jesus.

Well, as it always the case when movements become established, problems arose within those churches. So Paul needed to address those problems, and he did so in the form of letters which were passed around from one congregation to another. Over time, multiple copies of those letters were made, which increased his geographical “influence.” Some of these letters became “canonized” as part of the New Testament. What started out as personal letters were eventually granted the status of “holy Scripture.”

Here’s the thing, Paul wasn’t always pro-Jesus and in support of the church. In fact, early on he was the exact opposite; as a Pharisee, he was an enemy of the church. Pharisees were experts in the Jewish law, and were responsible for enforcing it. For example, the Pharisees were often at odds with Jesus because he would often do things that went against the law. One law in particular that he was often accused of breaking was the third Commandment, the law against doing any work on the Sabbath. Healing a person on the Sabbath was seen as a transgression the third Commandment because restoring someone’s sight or healing a broken body was viewed as work. So, the Pharisees would get angry with Jesus for healing someone if he did so on the Sabbath. Well, as a Pharisee, he believed it was his life’s purpose to make sure that Jews who purposefully broke the law were brought to justice. And those new followers of the Jesus, the people of the Way, were in his crosshairs.

We’re first introduced to Paul, also known as Saul, in Acts 7, where he’s present at the trial and stoning of an influential Christian named Stephen. Here’s how Luke describes Stephen:  Stephen, who stood out among the believers for the way God’s grace was at work in his life and for his exceptional endowment with divine power, was doing great wonders and signs among the people (Acts. 6:8). Those in opposition to Stephen brought false allegations against him. During the trial he was given the opportunity to speak. His speech was so upsetting to the religious leaders that when he finished, they dragged him outside of town and began stoning him. When the stoning began, we read that “the witnesses placed their coats at the feet of a young man named Saul.” And when Stephen died, “Saul was in full agreement with Stephen’s murder” (Acts 7:58; 8:1).

At that point in time, the church in Jerusalem experienced increased persecution, which scattered all the Believers out into the surrounding regions. But that didn’t stop Paul from doing his work. Acts 8:3 states, “Saul began to wreak havoc against the church. Entering one house after another, he would drag off both men and women and throw them into prison.” Saul was very Gestapo-like in his attempt to wipe out the church.

Today’s story from Acts 9 describes what happened to him during one of those expeditions. Luke tells us that just outside of his destination, Damascus, he was blinded by a bright light, and then heard a voice from heaven—which turned out to be Jesus himself—ask him why he was persecuting him (Jesus Christ), and then told him to go into the city and await further instructions.

Around the same time that Saul was being confronted by the risen and glorified Christ, the Lord spoke to a Jesus-follower name Ananias in a vision, telling him to go to a certain home nearby and pray over a guy who needs his sight restored. No problem, Ananias thought. I’m happy to do this. By the way, what’s the name of the guy I’ll be laying my hands on and praying over?

I’m sorry, what was that name again? I think I might have misheard you.

You mean, Saul, the guy who’s been persecuting your church, and is going from town to town, throwing your people in prison? That Saul?

Yes, that Saul. I’ve got a huge job for him. I’m about to change the course of his life 180 degrees. And it’ll begin with you praying for him.

Fast-forward to the end of that day. Ananias is walking home, and you can almost hear him saying out loud to himself, “I didn’t see that coming! I never would have guessed God would’ve given this job to Saul!”

From a human perspective, Paul was the last person anyone would have thought would be chosen to spread the word about Jesus Christ. But isn’t that the way God often does things? He has a way of picking the least-likely person to get the job done. Moses was a convict on the run, but God chose him to go back to the scene of the crime and lead his people out of their slavery. Little David was the youngest, smallest son of Jesse, yet it was he who God picked to eventually become the King of Israel. And, of course, it was little David the shepherd boy, and not a battle-seasoned soldier, who God tapped to fight the large Philistine warrior, Goliath. It was relatively uneducated blue-collar workers and not the educated men whom Jesus equipped with the knowledge and gifts to start the church after he was gone.

Who were the people who ended up being Jesus’ most effective messengers?

The fact is, God often chooses the least likely people to get the job done.

If that’s the case, then who are those who aren’t currently here? I’ll tell you who they are. With the exception of a handful of people who will come from other faith communities, by and large they’re the people who are not currently connected to a local church, who are not currently followers of Jesus, and who are not necessarily looking to get involved with a church at this time. To put it simply, I suspect that our future congregation will be made up of people whom many of us would deem the least likely to be interested.

Here’s another question. Have you ever considered inviting someone to a church event but decided against it because your first thought was, “I’m pretty sure they wouldn’t want to come”? If so, I think it’s quite possible that that’s a person God’s probably trying to reach out to…and trying to do so through you.

OK, here’s a radical growth-plan – and it’s not one you’ll find in any book. What if each of us committed ourselves to inviting to church every person we know who we honestly think would not be interested? Given the fact that God has a way of calling those who seem the least likely to us, what do you think might happen if every time you and I met someone who struck us as the least likely person to be interested in church, we committed ourselves to actually inviting them?

Gentlemen, we’re starting a brand new men’s Bible study on Tuesday, September 24. All of us know guys who don’t go to church, who don’t strike us as being all that interested in the Bible; guys we golf with, work with, exercise with, maybe even live with. Well, here’s my challenge to us: Let’s take a leap of faith and invite them to this new Bible study – in spite of how we think they might respond. Which, of course, means that you’ll need to participate, too! No doubt, many of them will decline the invitation. They may even laugh or scoff. But just planting that seed is something that the Holy Spirit can work with. And water. And eventually make grow and bear fruit. But it often begins with an invitation.

What if Ananias had refused to go to pray for Saul because he determined in his in his own mind that such an act was useless? Don’t we do that all the time? I know I do! Honestly, I’m afraid to find out some day how many people I’ve not invited through the years who would have eventually come! What if that’s one of the things God reveals to us when we get to heaven? Drew, I love you. But I also need to let you know that you passed up 3,269 opportunities to invite someone to connect with my body, and come know me—all of whom would have eventually said yes. Yikes! Well, let’s commit ourselves to being less like our usual selves when it comes to this kind of thing and, instead, be more like Ananias. May it be that a year from now we look around at many of the new faces here on any given Sunday morning and find ourselves quietly saying under our breath, “Wow! I never would have guessed! Praise be to God for the great things he’s doing here, and for the people he’s drawing to himself!”

Previous
Does God Play Favorites?
Next
The Foundation of God's Nature