When was the last time you had the experience of being overwhelmed with joy? The reading from Acts said that those who witnessed Jesus ascend back into his place of eternal glory worshipped him and then returned to Jerusalem overwhelmed with joy. Can you recall a time when you felt so much joy bubbling up within that it was nearly overwhelming? If so, that’s wonderful!

For me personally, I’d have to say that it happens, but only every once and a while; it’s certainly not a common experience. And the feeling itself only lasts but a moment. Typically it happens when, out of the blue, I’m suddenly aware of the deep joy I feel in regard to a close, loving relationship. It probably has to do with the fact that our daughter, Rachel, will be graduating from college next weekend and beginning a new phase of her life, but these brief moments of deep joy have most recently been centered around her. 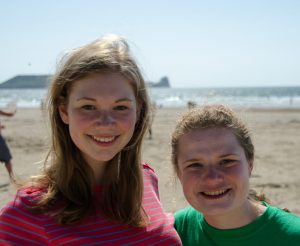 For example, I recently ran across this photograph of our daughter and her friend taken when they were in high school. When I saw it, I had one of those momentary experiences of overwhelming joy.  It’s a picture of them on a beach in Wales while they were in Great Britain during their 2013 summer tour with the Saline Fiddlers. For some reason, this photo really touched my heart. And I suddenly found myself emotionally transported to a place where I was keenly aware of the deep joy she’s brought to Caroline and me through the years. It lasted but a moment, but wow! was I ever overwhelmed with joy while it lasted.

I don’t know if you’ve ever thought about it, but joy is different than happiness. In many ways they’re in the same family of emotions. But at the same time they’re quite distinctive from each other. Happiness tends to be fickle; it rises and falls as one’s situation changes. You can be happy one moment, then very unhappy the next depending upon the situation.

A number of years ago I was nearing the front of the line to ride the Top Thrill Dragster for the first time. To say that I was happy about finally getting to this point after a 90 minutes wait in line would be an understatement. I was extremely happy and excited! But guess what? My happiness quickly turned to unhappiness when it was announced that they were closing the ride down for a few hours because of some problems that needed to be addressed. Happy one minute; unhappy the next.

Joy, on the other hand, resides a lot deeper. It’s a soul emotion, and it’s not situation-dependent. Joy can be present and felt even while grieving. Illness doesn’t automatically rob a person of deep joy. I’ve talked with people who are homeless and have hardly a penny to their name, and yet there’s a deep joy in their heart.

Joy is an important quality that marks the life of someone in whom God lives. In a way, joy is a gift from God. It’s not something we can conjure up or create on our own. It doesn’t come our way only when the situation would make us happy. Rather, it’s something that God releases deep within as we walk with him hand-in-hand, which can have the effect of helping us experience the meaning and purpose we’re all seeking after in life. Deep joy tells us that despite the circumstances, there’s something worthwhile in this life. That there’s something wonderful in life, even if we can’t necessarily see it.

Both of today’s Bible readings were written by Luke, who mostly likely came to faith in Jesus Christ under Paul’s leadership. In addition to compiling all the stories of Jesus that comprise the Gospel bearing his name, he also authored the New Testament book of Acts, which is the really the historical record of the beginnings of the Church. Both of today’s readings reference the same event, which Christians commonly call “the Ascension of Jesus,” when he ascended back into heaven. The Bible tells us that after Jesus was resurrected, he spent the next five or six weeks showing people he was alive. And Luke tells us that there was actually a last day he was with them in body. It was on that day that he gathered his friends together in a place far away from the crowds of people and did two important things.

First, he reminded them of something he’d told them during the Last Supper (cf. John 14-16), which was that at some point in the near future he would send his Spirit upon them. And according to Luke, in this final gathering he gets even more specific about what will happen, and what it will result in. He instructs them to stay in the city until they “have been furnished with heavenly power” (Luke 24:49), which elsewhere is referred to as “being baptized with the Holy Spirit” (Acts. 1:5).  So, they’re to stay in Jerusalem until the Spirit of God comes upon them in power—whatever that looks like.

The second thing he did, which gives us the name of this event, was to return to his heavenly dwelling by “being taken up to heaven” (Luke 24:51). It appeared to them as if he floated away like a hot-air balloon. Luke describes a bunch of people gazing skyward as Jesus “was going away” (Acts 1:10). Does that sound weird? It did to me for years and years. But here’s how I’ve come to understand what happened that day.

Jesus is the 2nd Person of the Trinity. He’s the Son in the ‘Father, Son, and Holy Spirit.’ According to John (who wrote the Gospel of John), he’s the eternal divine entity through whom everything in all creation was created (John 1:3). As the Son, he dwelled eternally with his Father in Glory. As a human being, he lived among us for 33 or so years. But on this particular day he returned to his eternal place of glory, leaving his friends behind, so to speak.

In his resurrected body, Jesus was not limited to the laws of physics that govern the created realm. You and I have earthly bodies which must adhere to the law of gravity. The fact that the earth spins on its axis keeps us grounded—literally. But the physical body with which Jesus was resurrected was not restricted by the laws of physics of the created order. Gravity held no control over Jesus’ body. Though the earth spun and the people remained firmly planted upon the earth, when the time came for him to return to his eternal glory, he willed himself to float away. They could see him leave. They knew he was going to a place far away, represented by the sky. They knew he was going where they couldn’t go on their own. And as they stood there gawking upwards, two men in white robes, not previously there among them, asked, “Why are you looking toward heaven? This Jesus, who was taken up from you into heaven, will come in the same way that you saw him go into heaven” (Acts 24:11). According to Luke, at that point “they worshipped him and returned to Jerusalem overwhelmed with joy,” where they spent a lot of time together in prayer with all of the other Believers (Luke 24:52-53).

Here’s what I want us to think about. Some forty days earlier they grieved Jesus’ death. It was difficult to imagine life without him. To whom could they possibly turn who would bring them so much joy and meaning? No one! A few days later they discover the impossible—he’s not dead! It was like their worst nightmare was just that—a nightmare; it felt like it wasn’t real. Because he was there, and he was everything they wanted and needed. I can only think that the idea of “losing” him again was not at the top of their wish list. If anything, they probably hoped that he’d be there with them forever.

Kind of like when Rachel was a little girl and we told her a day would come when she would live in another house on her own, away from mom and dad, and she adamantly denied that such a day would ever come. She would live with us forever! Do you suppose that during those days after his resurrection, Jesus’ friends secretly hoped he’d be with them forever?

But he didn’t stay. And his leaving made it clear that he wasn’t coming back anytime soon. The two men in white—angels—spoke of a day he’d return, but who knew when that would be? He left them, and they would never see him again. And yet, we’re told that this time they didn’t grieve; they returned to Jerusalem not crying, but praising God! They returned to the city overwhelmed with joy.

Something was new. Something was different about this leaving. I have to believe that this time round they understood what was happening. Jesus’ probably had reminded them about everything he told them previously, but didn’t understand. But now they understood; they understood that only by returning to his glory would he be able to send his Spirit to them. And where he could only be in one place at one time in his earthly or resurrected body, his Spirit could be in all places at all times… And fill all people who would entrust their lives into his saving grace. And the result? Joy! And joy that can, at times, be overwhelming…beyond comprehension.

Yes, there are lots of wonderful things in this beautiful world that bring us joy: grandchildren, blooming flowers, children who are doing what they love doing, a glorious sunrise or sunset, a Beethoven symphony, a child’s first recital, owning one’s first home, getting married, the birth of a baby, and even releasing a loved one into God’s eternal care. God has blessed us with a world that is full of so many blessings we can’t even begin to count them all, blessings which bring us joy. But the greatest joy that any of us can ever experience comes from knowing Jesus Christ, the Author of life and the Giver of all joy. To know Jesus is be given his Spirit, who releases his joy into our very lives. And in so doing, we’re given a victory over all that would rob us of our joy in Jesus (cf. John 16:22). Thanks be to God who has filled us with all joy in believing in Jesus Christ, our Lord, our Savior, our Life.

Previous
The Goal: Loving Radically
Next
We've Got the Power!