What would motivate you to actively take the next in your walk of faith? What would it take for you to choose to go one step further along your own ‘path of discipleship’? Except for those who feel they have, as the song in Oklahoma puts it, “gone about as fur as they c’n go,” most of us are on a life-long spiritual journey. I’m simply asking the question, what’s the next step of your own journey, and what would get you to take that step?

As 2017 was drawing to a close, I was asking myself this very question. After a bit of prayer and soul-searching, I determined that one next step was to intentionally walk alongside someone else in their own walk of faith as a spiritual mentor. And so one of my goals for 2018 was to begin mentoring 2 men. Not having a clue who those men might be, or how I would go about making it happen, I laid it before the Lord, asking him to make it clear to me. I’m not kidding when I say that within two weeks I was contacted by two different men, both of whom expressed an interest in having a spiritual mentor!

The three of us have taken the next step in each of our respective paths of discipleship, and it’s been a tremendous blessing. I’ve seen significant spiritual growth in both of them, and I can attest to the fact that walking alongside another brother in Christ has pressed me forward as well.

What would be one thing you could do that would help you to live just a little more faithfully? Not that you aren’t already living faithfully, but that there’s still plenty of pathway in front of you. 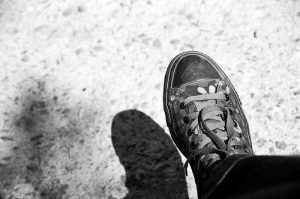 I know what my next step is, and for me it’s going to be more challenging than mentoring another believer. My next step in discipleship is to become much more invitational in my daily encounters with people I know and those I meet. I’ve been encouraging you all to actively invite people to “give our church a try.” And it’s something I need to do as well.

Like most of you, it’s not something I’ve ever done before. Inviting people to church has never been an expectation; it was never a strategy for growth in which I was asked to participate. And, just as most of you probably feel, I find the task of inviting people to our church more than a little daunting. What do I say? How do I actually pose the invitation? What if they laugh, or say no? Will they be offended? How will I know when it’s the right moment?

I’ll be the first to admit that taking this particular next step is going to require some courage. But I’m willing to try. Literally. I’m going to will myself to respond when God creates an opportunity for me to invite someone.

How about you? Despite the fact you’ve never done it before, will you take that next step and join me?

In-person worship is canceled through January 30. Please join us online Sundays at 9:30 am.